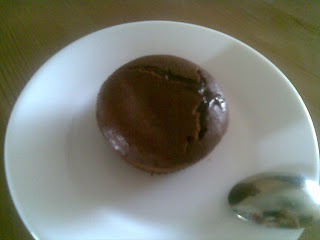 When J & LL came over the weekend, I tried baking chocolate lava which turned out a tad too dry (yea, overbaked :P). Yohei requested for Chocolate Lava for dessert today and since WT was coming over to get some paperwork done, I baked a small batch. It turned out much better, having learned from the previous stint but I think I can still improve on the the temperature control. The chocolate is moist, as you can see from the picture but it doesn't flow out as I had hoped it would. Ah well, there will always be a next time. The recipe came from here.

I halved the recipe and it yielded 5 small ones (used small cups as I don't have any of those regular ramekins). For chocolate, I mixed 3oz of Carrefour's Noir chocolates (60%) with some Hershey's unsweetened chocolate since we all prefer it rich with the slightest hint of bitter.

It would have been much better if we had some vanilla ice cream handy but that would be too sinful, wouldn't it? :)