Woke up one morning and decided I want to make orange marmalade.  This is going to be a kitchen adventure because I have never made any before.

Lots of searching online yielded all kinds of recipes but all asked for the use of pectin.  I was not keen on using that and almost gave up searching.  Until I came across Alton Brown's Orange Marmalade recipe.  There's no pectin but it called for a mother load of sugar.  But he's Alton Brown.  He can't be wrong.

But before I could start, I needed to look for mason jars.  I went to Spotlight, remembering I saw some jars there before but could only find lids.  After running around a bit, a girlfriend prompted me to visit Howards Storage World and I found the last 2 boxes of jars that they had in their Plaza Singapura outlet!  Lucky me! 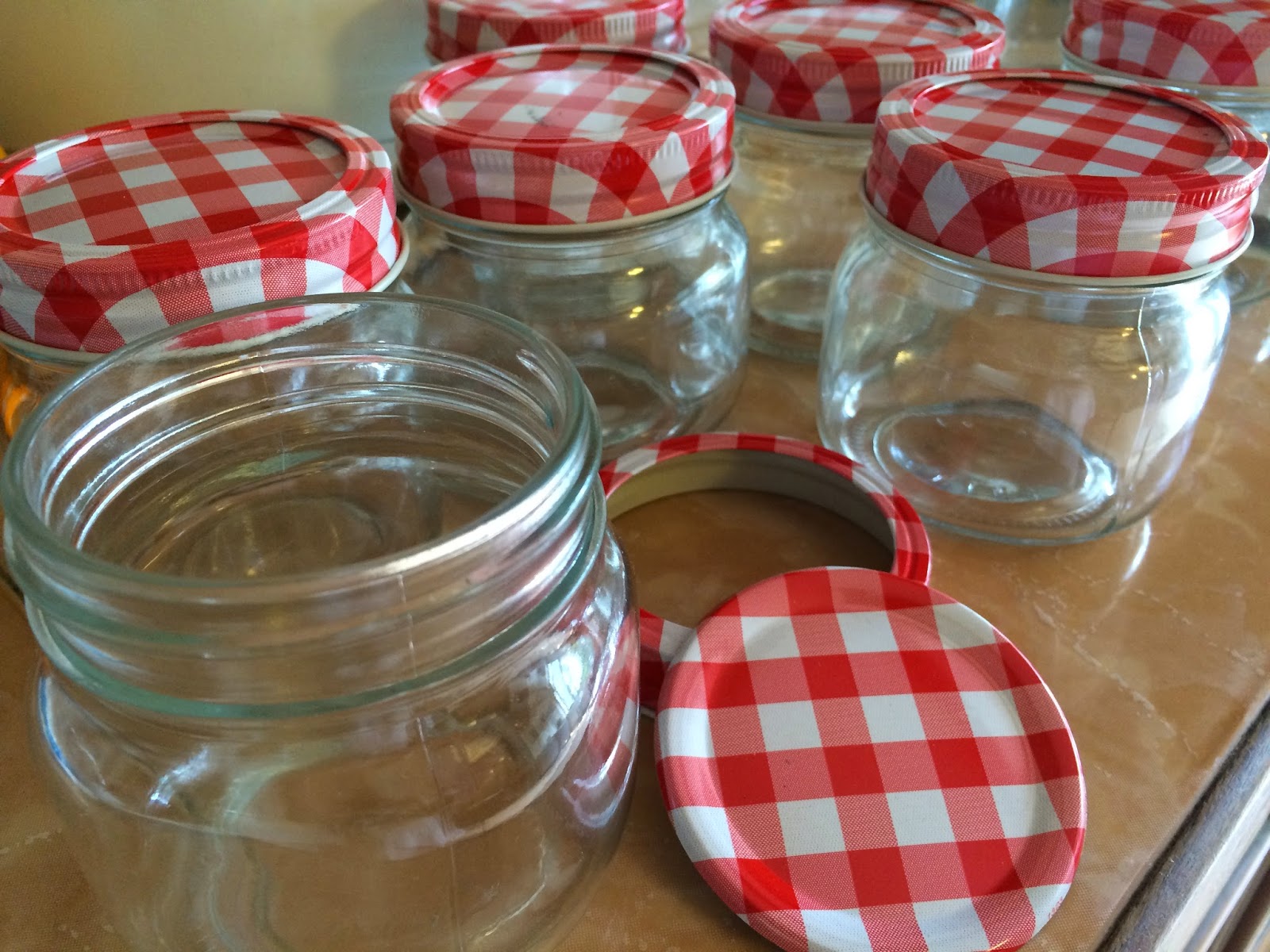 Here's the ingredient list taken off the Foodnetwork site

You would also need 2 very large pots, 1 for the marmalade and 1 for sterilizing the jars.  By large, I meant at least 6 litre pots.

The oranges are first cleaned and sliced using a mandoline.  It will be a bonus if you have a kitchen helper (it's really tiring slicing the oranges).  Be careful to remove the seeds but if you can't catch them it's fine.  When the marmalade boils, they will come to the top and you can just scoop them out. 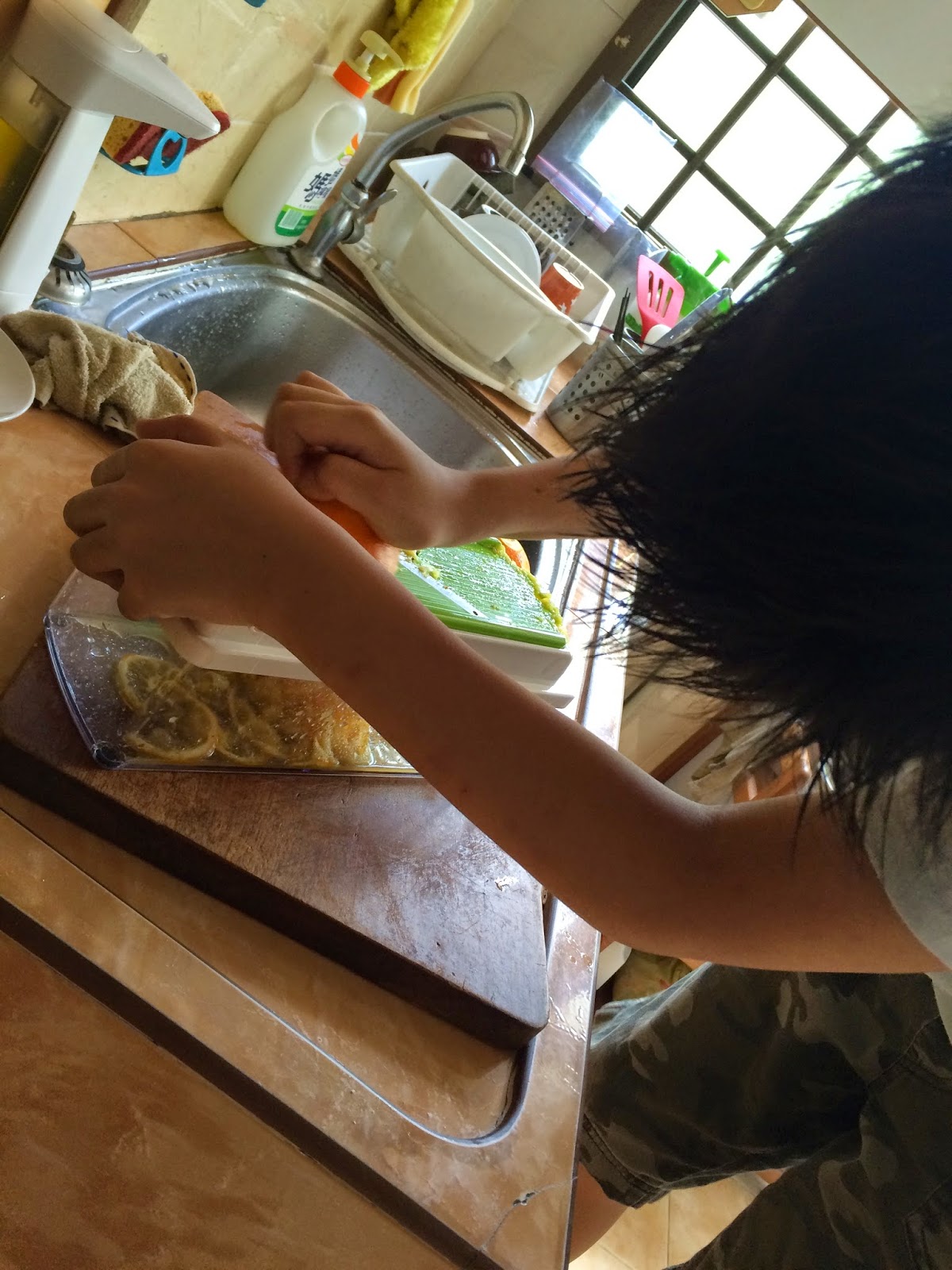 The sliced orange, lemon juice, lemon zest and water are all added to a 6L stainless steel pot.  Bring it to a boil and then turn the fire down to keep it on rapid boil for another 40 minutes, stirring constantly.  The fruits will be softened during this time. 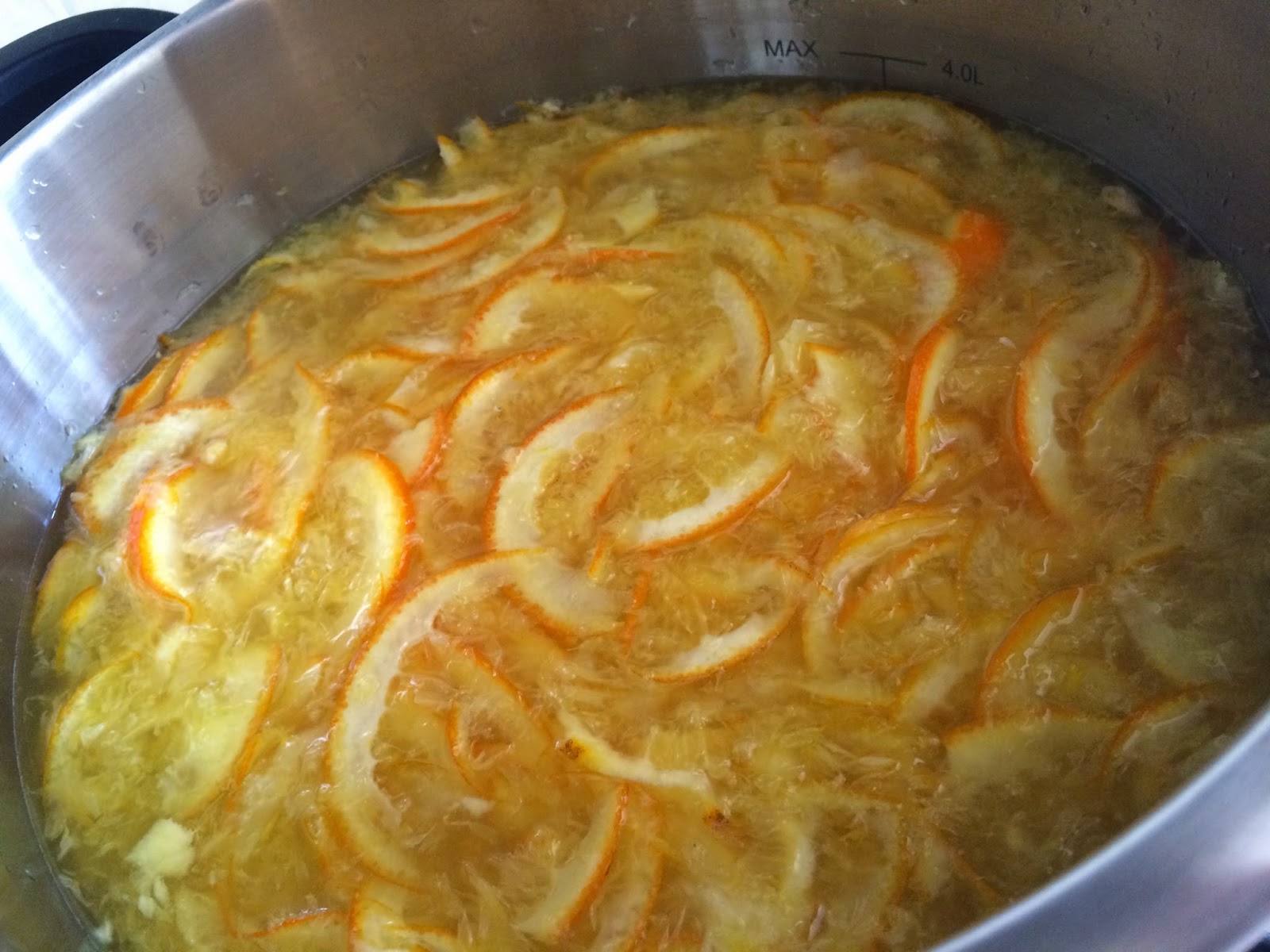 At the same time, boil water in another pot to sterilize your jars and covers.  The site asked for the tongs, rack, ladle and funnel to be sterilized too.  Once the water boils, put everything in to boil for 10 minutes then put the pot lid on and leave them till needed. 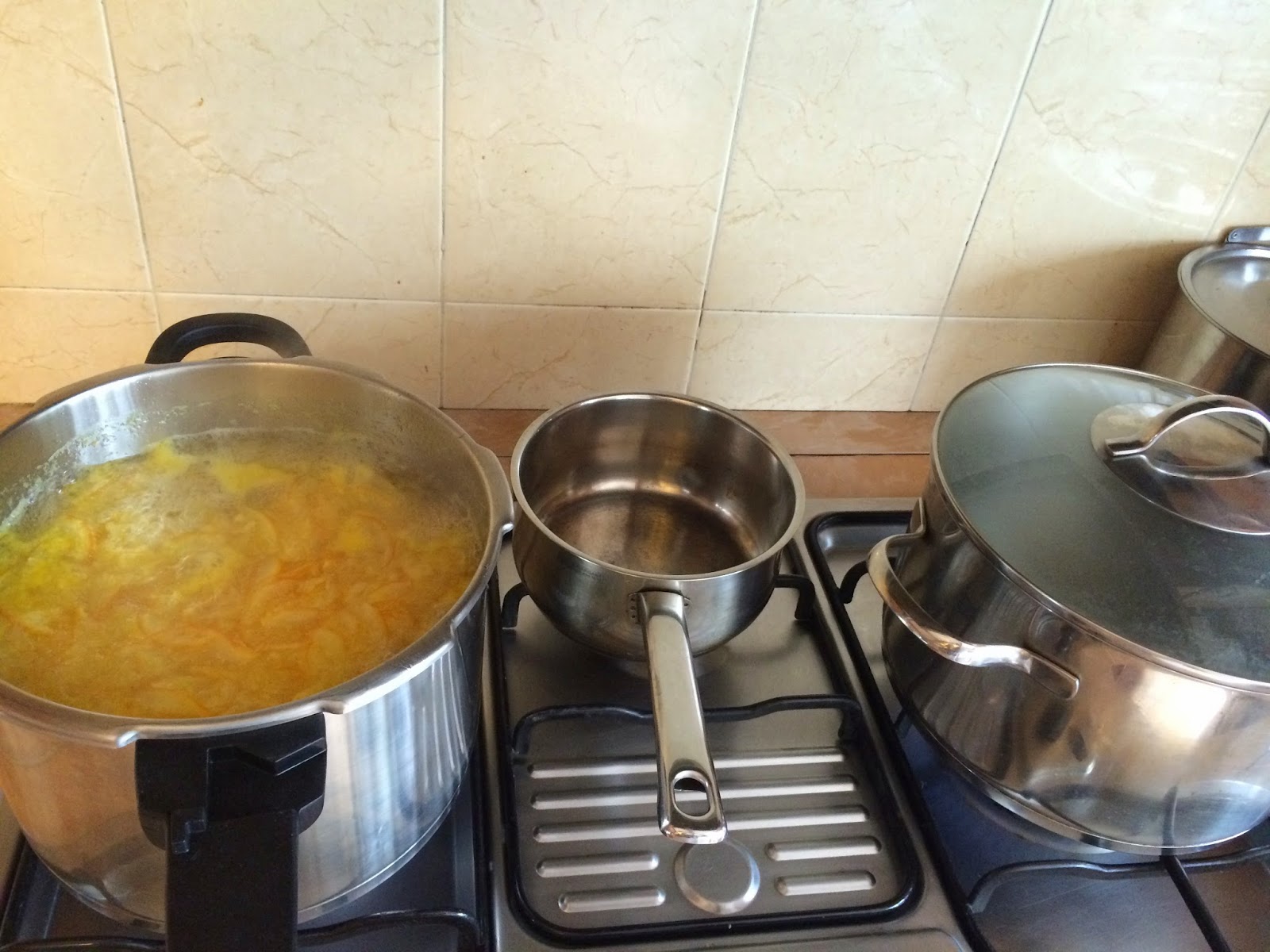 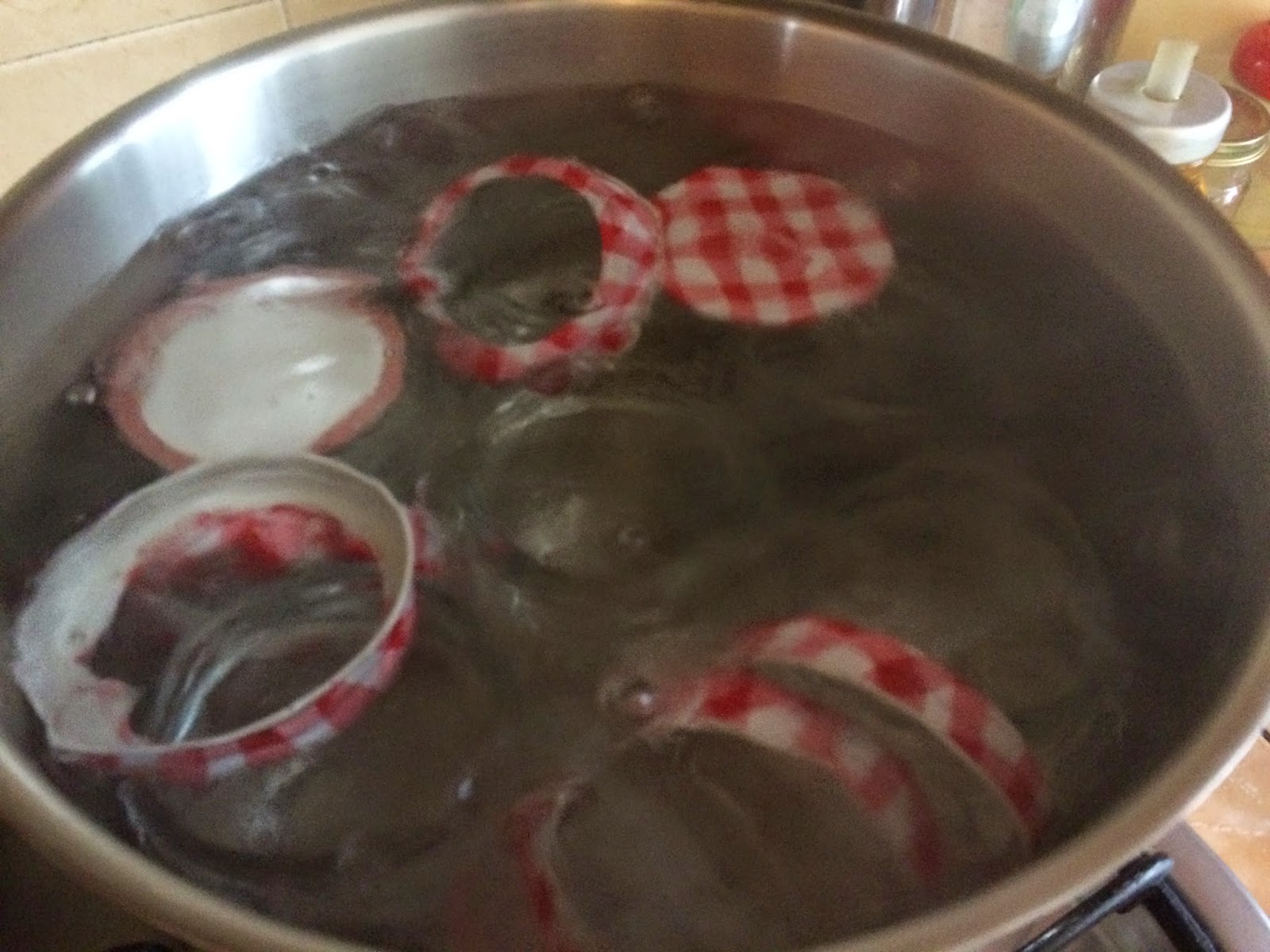 Remember to stir your marmalade constantly.  When the 40 minutes are up, add in the sugar and keep the boil going for another 20 minutes, till the temperature reaches 105 Deg C.  If you don't have a thermometer, then you will need to eyeball and test it by first putting a small dish into the freezer for about 10 minutes.  Then, put a small teaspoon of the marmalade on the plate.  Let it sit for about 30 seconds then tilt the plate.  If the marmalade is runny, continue boiling.  If the marmalade is gel-like, then you are good to go.  At which time, your marmalade would also reach a nice amber colour. 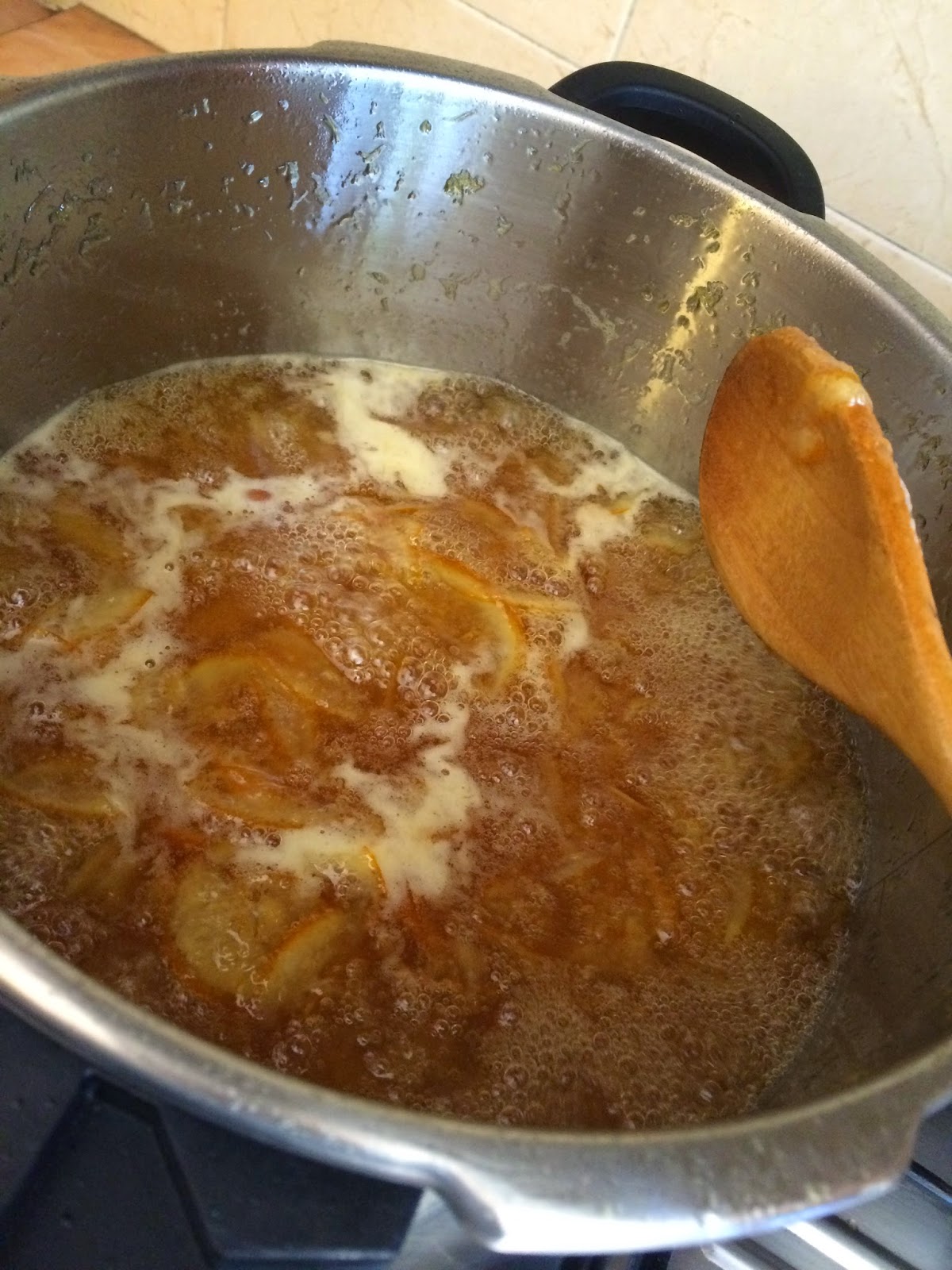 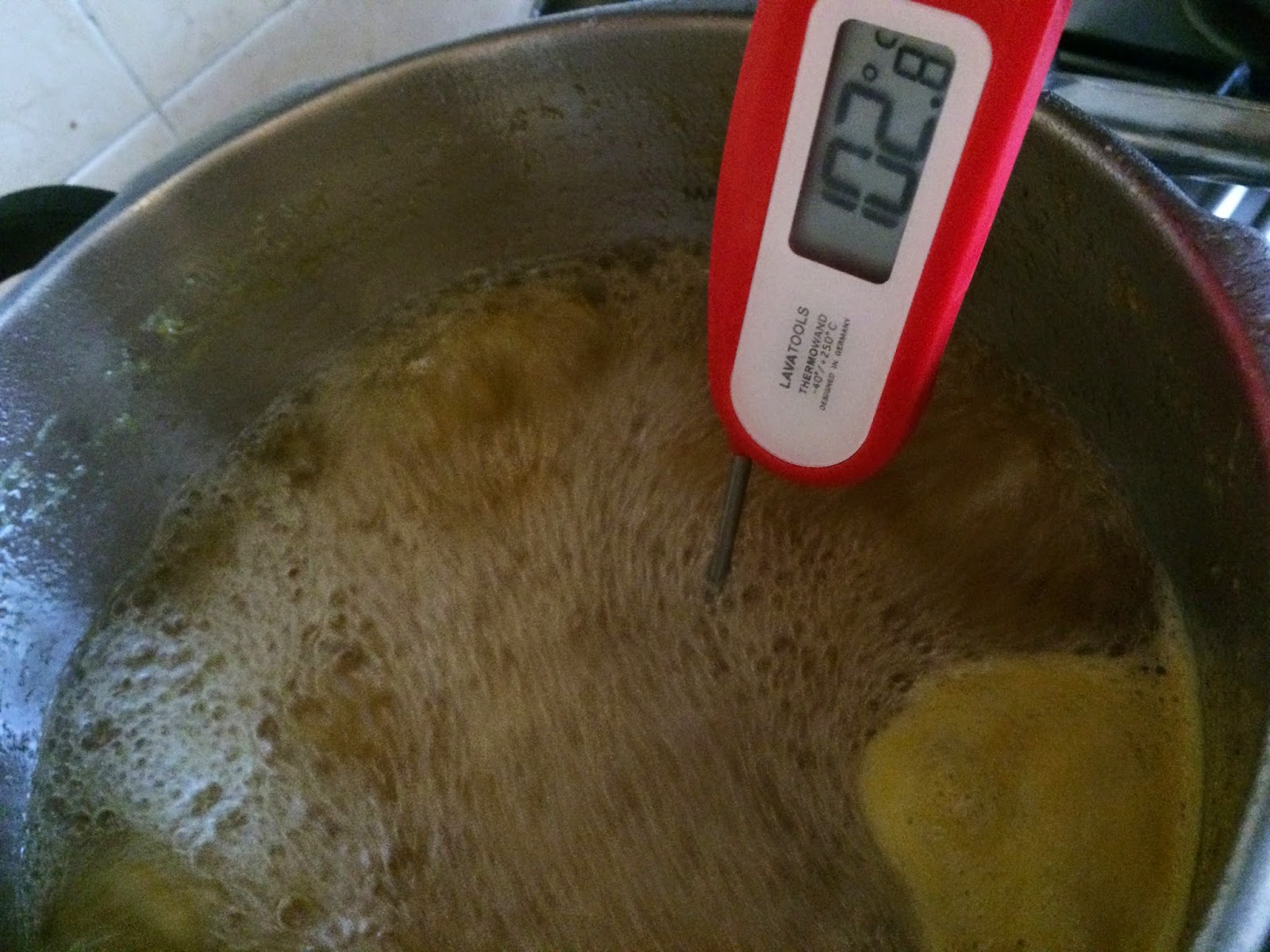 Remove the jars and lids from the water and dry on a clean cloth (or rack).  Once the marmalade is ready, fill the jars up to the base of the screw line.  Put the lids on.   While you are filling your jars, put the heat back on the pot of water used for sterlizing the jars and get it boiling again.  Once you are done filling the jars, put them back into the pot to be sterilized.  To prevent the bottom of the jars from touching the pot, put them on a rack or like me, use a folded cloth.  Boil the filled jars for about 10 minutes.

Remove the jars from the pot and leave them out for 24 hours in room temperature before opening.   Once opened, they can last for a month.  Unopened jars should last for 6 months.  Left over marmalade in the pot could be placed in a small container to be eaten the next day. 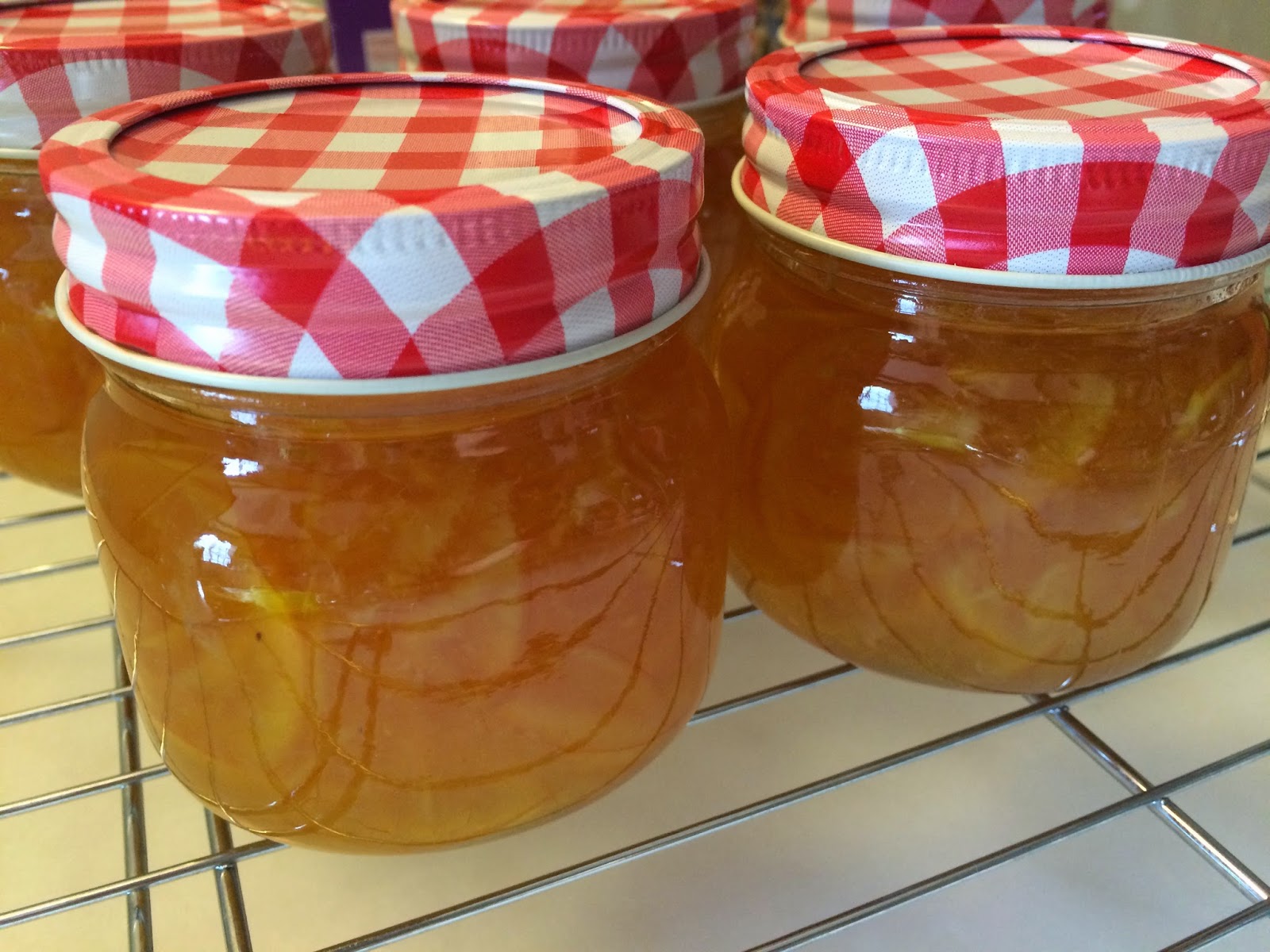 The home-made marmalade tasted quite different from store-bought stuff.  It's naturally fragrant and does not have a very strong taste or smell, unlike commercial marmalade that generally has additives to make the smell and look more attractive.

Next up, blueberry marmalade!