The master bedroom toilet leaked from the base every time we flushed so I called the Town Council people to fix it. The technical officer came with his contractor 2 weeks back and simply applied a coat of silicone to the base, insisting that it will fix the problem, when I kept telling them they have to open up the toilet to check the pipes since that must be where the leaks are from.

"We had this problem before and this is how it's fixed," the technical officer insisted.

As they left, I told the officer the toilet will definitely leak again because the problem's not solved. True enough, the next day, water flowed out from another spot at the base, and it's worse this time round! I immediately called a senior officer at the Town Council and lodged my complain. They promised to send someone down to fix.

1 week passed and finally a plumber came today. When I told him what happened, he immediately asked why the other contractor didn't open up the toilet bowl to check.

When the toilet was removed, here's what it looks like: 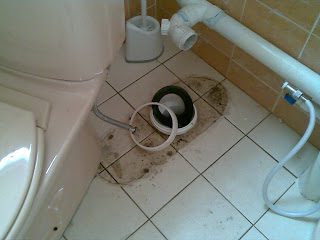 The HDB contractor who fixed up the toilets during the upgrading works did such a lousy job, the pipe and joints in the toilet bowl has dislodged! Don't ask me how that can happen. It's clearly, as what the plumber said, a F*#$(#$*#( screwed up job.

So now that the plumber has fixed the toilet, I hope we'll not get anymore surprises.

For those of you who has toilets upgraded by HDB, keep a close watch on your toilets...
Posted by Unknown at Tuesday, November 04, 2008